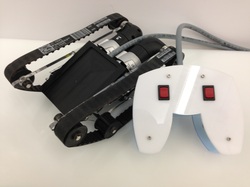 The final lab of ES51: Computer-Aided Machine Design involved designing, building, and testing a small All-Terrain-Vehicle under time and monetary constraints.  The ultimate goal of the lab was to create an ATV that could complete an obstacle course during a final, capstone competition of the class. The competition involved racing through five obstacle areas testing torque, agility, clearance, compactness, and power.  Our team of three was given one month, fifty dollars, and only a few provided parts to completely design and fabricate our vehicle.  Except for the motors, gearboxes, and treads, the ATV was built entirely from scratch with all parts machined by the team members.

Our design was innovative, differing significantly from previous models as well as our competitors. To achieve the torque necessary for navigating the course, every other ATV to date has utilized external gears in addition to a provided gearbox, despite gear meshing often being the first point of failure for ATVs during the competition. Our design completely eliminated the need for external gearing.  Instead, by salvaging a 90° degree chuck that came with the drill motors we used, we were able to provide power directly to smaller wheel that sat within the tread, while still staying within the dimensional constraints. This helped make our design simpler and more durable than our competitors.  The simplicity allowed us to make our design entirely modular: the entire ATV could be disassembled and assembled in five minutes, allowing us to easily switch out components and reposition components with respect to one another.

Our ATV performed superbly, garnering 695 points, shattering the previous course record. However, an even better ATV promptly trounced us just minutes later!
Take a look at our team's final report: